Established in 2011 in New York by Evelyn Gruss Lipper M.D. (Clinical Associate Professor Emerita of Pediatrics at Weill Cornell Medical College) the foundation continues a family tradition of Jewish philanthropy begun in 1968 by her late parents Joseph and Caroline Gruss. 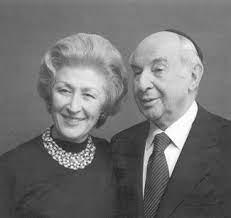 Financier and philanthropist Joseph S. Gruss was born as the youngest of seven children in 1903 in the town of Lvov, to a father who was a banker and Talmudic scholar, and a mother whose family were grain merchants. Between the two world wars, Lvov - today the Ukrainian town of Lviv - had the third largest Jewish community in Poland, known for its rich intellectual life.

Joseph attended business school in Poland and in 1934 he married Caroline Zelaznik, a lawyer who clerked for a Polish judge. As the young family prospered, Joseph established a travel bureau in New York and he and Caroline were visiting the US in 1939 when Poland closed its borders. Many members of their family, including their first-born child, perished in the Holocaust.

Gruss went on to found the Wall Street firm Gruss & Company and by the late 1960s, he and Caroline had become leading benefactors in international Jewish philanthropy. He is known to have said that his greatest pleasure was "to give to charity with a warm hand”. Their donations supported hundreds of schools, improving their physical conditions and establishing quality educational initiatives in the sciences as well as other secular subjects, such as English and Math, to complement their Jewish education.